By africansafarisltd, October 23, 2017 Posted in: Botswana, Travel Advice and Tips

As a result of global warming, weather patterns around the world are changing and Botswana is no exception. 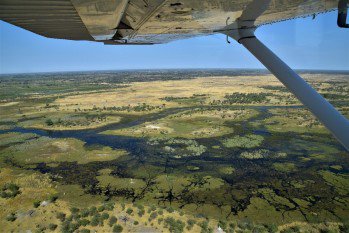 Comprising of permanent swamps, seasonal swamps, occasional flooded areas and dry land the Okavango Delta is one of the largest and most intricate wetlands in the world. It is a highly dynamic seasonal environment that changes from year to year, month to month and on occasion from week to week. Depending on the time of year the size of the flooded area fluctuates from between 12,000 km2 in times of high flood and 5,000 km at its driest. This and whether there has been a high or low â€œfloodâ€ has enormous impact on wildlife habitats which in turn affect game concentrations and movements. When there is a high flood the animals move away in search of new grazing whereas in a low flood and receding water levels there is more land available for game drives. Visitors can experience great game viewing due to animals congregating along river banks and at permanent pans.The Delta ecosystem is governed by the summer rains and the winter floods. Summer rainfall (end Nov – Feb/Mar) tops up seasonal pans and helps keep the channels full, but towards the end of summer the waters recede only to rise again when the floodwaters, that originate over 1000 kms away in the highlands of Angola, eventually reach the inner delta.Â Typically the floodwaters from the Angolan highlands arrive at Mohembo at the top of the Okavango Delta Panhandle in April. Making slow deliberate progress down the Panhandle the flood reaches the inner delta by June and peaks during the dry winter months of July/August. Creating a labyrinth of new waterways, lagoons and channels water seeps into areas where there was none the day before. By September levels slowly start recede due to evapotranspiration from the highly permeable Kalahari sands exceeding annual rainfall. The driest period in the delta is October and November when channels become mere trickles and the floodplains turn a dry mossy green.