Gaining independence in 1990, Namibia is one of the world’s youngest nations.  It has an agelessness that is simply mesmerizing.  Namibia is a nation of grand landscapes that is home to tribes including the Himba and San (Bushman).  Namibia takes its name from the Namib Desert, whose sand dunes sweep down to the crashing waves of the Atlantic Ocean.

Though southern Africa’s driest country, Namibia is widely regarded as one of the region’s finest wildlife destinations.  Along the shoreline of Skeleton Coast National Park desert-adapted elephant, giraffe, oryx (gemsbok) and kudu are hunted by lion, jackal and hyena. Further south, Cape Cross is home to one of the largest colonies of Cape fur seals anywhere in the world.

Etosha National Park is so large it can be seen from space.  The park is home to elephant, black rhino, big cats and a huge number of herbivores.  All are attracted by the salt licks and freshwater of this giant salt pan.  While Sossusvlei pan is perhaps better known for the epic sunsets that ignite the sky above the red sands of Dune 45.

Elsewhere in Namibia, Fish River Canyon, Africa’s largest, rivals all these natural sights when it comes to picture-postcard beauty.  The Bavarian architecture of Lüderitz and Swakopmund also deserve exploration.  Alongside the ghost town of Kolmanskop on the edge of the otherwise prohibited Sperrgebiet diamond mining area.

Namibia is a photographers dream of stunning landscapes with a side of wildlife and culture.  On this accommodated tour you start in Livingstone, Zambia, travelling…

On this classic Cape Town to Victoria falls tour, you will journey through Namibia, Botswana and Zambia visiting Fish River Canyon, the wildlife in Etosha…

On this accommodated adventure you will be visiting the highlights of Namibia and Botswana. Starting in Livingstone, Zambia you can visit the mighty Victoria Falls…

This classic 15-day Botswana and Zimbabwe Wildlife ourney takes you through Botswana, Namibia and Zimbabwe, which are all part of the international Kavango Zambezi (KAZA)…

Our 16-day Desert Rivers and Wildlife Adventure is a modified version of our longer 21-day Trans-Kalahari Adventure itinerary.  This shorter tour offers an abundance of…

Experience the popular and exciting Cape Town to Victoria Falls route on our accommodated 21-day Trans-Kalahari Adventure. You will traverse the Kalahari Desert and the…

This is a camping adventure visiting the highlights of Namibia and Botswana. Starting in Livingstone, Zambia you can visit the mighty Victoria Falls before entering…

On this camping adventure you start in Livingstone, Zambia, travelling west through the “Caprivi”, a narrow strip of land sandwiched between Botswana, Zambia and Angola. …

On this tour, you spend a full day in Cape Town exploring the Cape Peninsula before heading up the coast and into Namibia where you…

This classic camping tour is a journey through Namibia, Botswana and Zambia visiting Fish River Canyon, the wildlife in Etosha Pan National Park, the Okavango…

Experience the popular and exciting Victoria Falls to Cape Town route on our fully-serviced camping 21-day Trans-Kalahari Adventure.  Offering an abundance of scenic, wildlife and…

Our 15-day Namib to Falls Adventure is a modified version of our longer 21-day Great Trek Adventure itinerary.  This shorter tour still offers an abundance…

This seventeen day guided safari combines the highlights of Namibia with four nights of camping adventure in the rugged Damaraland and Kaokoland. Visit the AfriCat…

This luxury Namibia Fly-in and Private Guided Safari affords you the chance to experience this magnificent and memorable country in a very personal way. You…

This Namibia Fly-in and Private Guided Safari affords you the chance to experience this magnificent and memorable country in a very personal way. You will…

Namibia is a vast country, even by African standards, covering an area approximately twice the size of California and four times the size of the…

This Namibia Under Canvas Safari affords you the chance to experience this magnificent and memorable country in a very personal way. You will have your…

This guided Namibia safari takes you to some of Namibia’s highlights. Admire the deep gorges of the Fish River Canyon, climb the world’s highest dunes…

Explore the bare plains of the Namib Desert, the apricot coloured dunes of Sossusvlei, the romantic coastal town of Swakopmund nestled between the Ocean and… 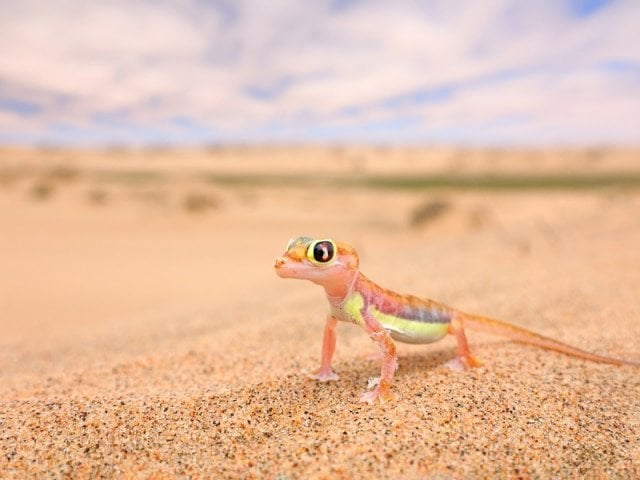 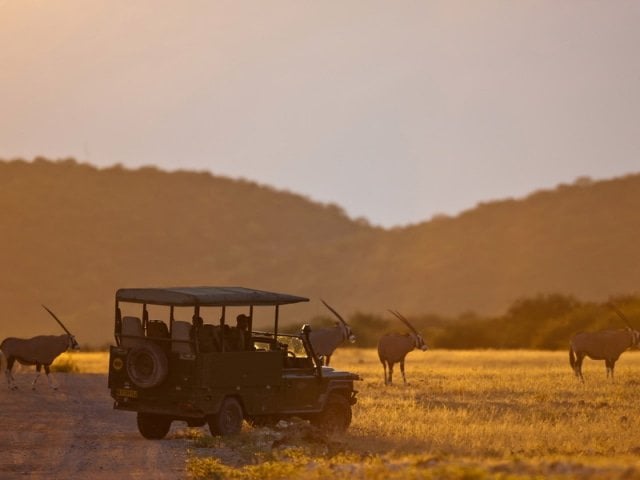 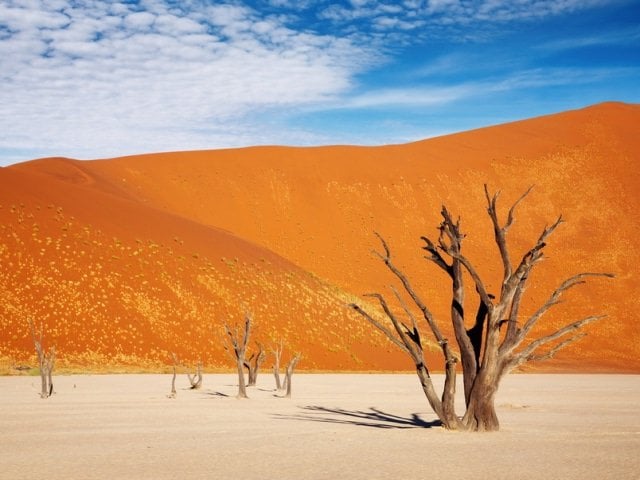 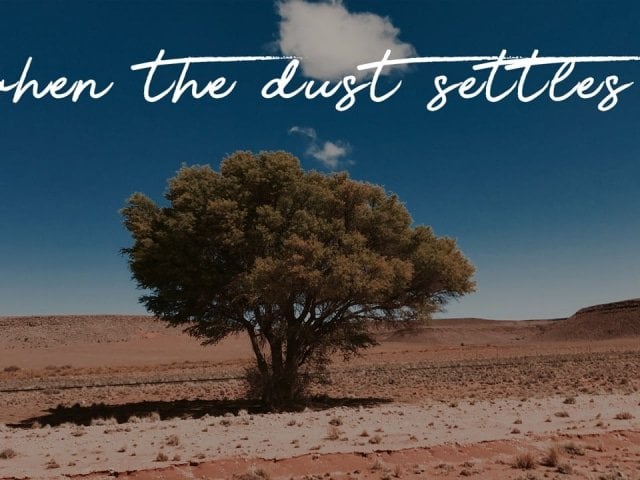 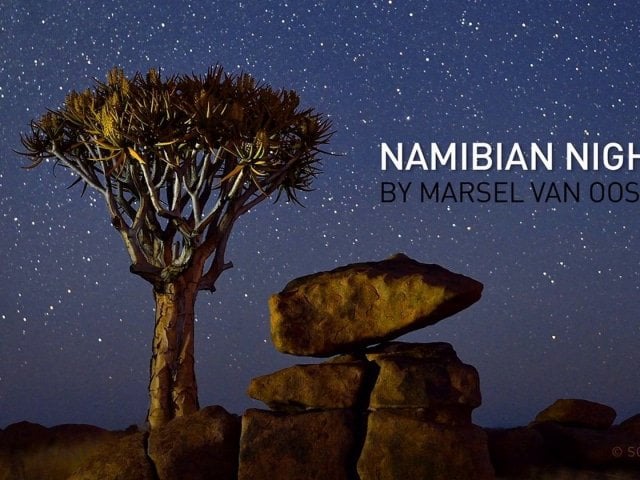 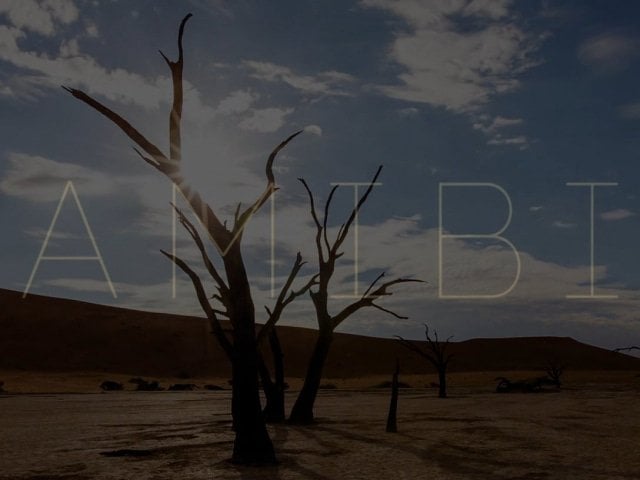 The Namib-Naukluft National Park is a 50,000 square kilometre wilderness in the Namib Desert, with shifting terracotta dunes, wide plains, and sparkling savannah bordered in...

Stretching from the Swakop River to southern Angola, the Skeleton Coast is known as the ‘Land God Made in Anger’ and is remoteness at its...

Khowarib is a tiny village between Kaokoland and Damaraland in northwestern Namibia. Just minutes away lies the Hoanib River – one of the few free-flowing...

Straddling the Angola/Namibia border, the Kaokoveld is a dry, mountainous and relatively undeveloped region that takes in the harsh beauty of Namibia’s Skeleton Coast and...

Spreading across Botswana, South Africa and Namibia, the Kalahari meaning ‘the great thirst’ is an exceptionally beautiful living desert. The landscape is characterised by a...

This Nature Reserve was founded by Landscape Conservationist and Philanthropist Swen Bachran in 2010, and it serves as a natural buffer from the harshest desert...

Spanning an area of 172,200 hectares and encompassing four distinct ecosystems, the Namib Rand Reserve is among the largest privately owned game parks in Southern...

The Namib Desert is the world’s oldest desert, and although it stretches along the entire length of Namibia’s coastline into southern Angola and even the...

Situated in southwestern Namibia at the edge of the world-renowned Namib Desert, the Tiras Mountains provide the perfect backdrop for visitors who venture to this...

Situated on the eastern side of Etosha National Park and bordering Fisher’s Pan, Onguma Game Reserve has more than 20,000 hectare of protected land and...

Situated in the Otjozondjupa Province, in the centre of what is known as the ‘Golden Triangle’, the towering Otavi Mountains are surrounded by the Northern...

Set roughly 200 kilometres east of Rundu on the southeastern banks of the great Okavango River, the small village of Divundu is known for its...

Damaraland is typified by displays of colour, magnificent table topped mountains, rock formations and bizarre-looking vegetation. The present-day landscape has been formed by the erosion...

As there is no accommodation at Sossusvlei, visitors to this desert wilderness are likely to end up staying at Sesriem, 65 kilometres away, where camps...

Situated in the western part of Etosha National park, Etosha West is a new addition to this world-famous wildlife sanctuary. Formerly a restricted area the...

Located in Northwestern Namibia, Etosha East is a protected sanctuary in the eastern part of the world-renowned Etosha National Park, known as one of the...

Situated in south central Namibia, fringing the Kalahari Desert, the city of Mariental lies along the TransNamib railway and serves as the Hardap Region’s commercial...

The Palmwag Concession spans 450,000ha of arid wilderness transected by ephemeral river courses which, along with the occasional natural spring, provide an oasis to the...

Okonjima is home to the AfriCat Foundation, a wildlife sanctuary founded in 1991 that is dedicated to creating conservation awareness, preserving habitat, promoting environmental educational...

Perched above the plains of the Namib Desert and tucked away in the rocky Aus Mountains, the small village of Aus is located in the...

Sandwiched between the rugged and stark Atlantic Coast and the arid Namib Desert, the town of Luderitz is set in an incredibly unique geographical setting....

Situated in Namibia’s spectacularly scenic Namib Desert, between Usakos and Swakopmund, the Spitzkoppe are a group of bald granite peaks forming one of Namibia’s most...

Forming the boundary between Botswana and Namibia is the Chobe River – one of the most well-known perennial rivers in Africa. The Chobe River Front...

Etosha National Park covers 22,270 km², of which approximately 5,000 km² is made up of saline depressions or ‘pans’. The largest of these pans, the...

Bordering Angola, on the banks of the Okavango River in northern Namibia, the town of Rundu serves as the capital of the eastern Kavango region....

This most frequently visited section of the massive 50,000 km² Namib Naukluft National Park has become known as Sossusvlei, famous for its towering apricot coloured...

Swakopmund, on the coast of Namibia, resembles a small, German coastal resort nestled between the desert and the sea. It boasts a charming combination of...

Meandering through the spectacular Caprivi Strip in northwest Namibia, the Kwando River rises from the central Angolan highlands forming the boundary between Namibia, Zambia and...

Carving out an epic rocky wonderland in the south of Namibia, the Fish River has created Africa’s largest and the world’s second-largest...

Located just south of the boundary of Etosha National Park in northwestern Namibia, Etosha South makes up the southern region of this wild paradise. Ongava...

Windhoek, Namibia’s capital city is nestled amongst rolling hills, bounded by the Eros Mountains in the east, the Auas Mountains to the south and the...

Situated in northwestern Namibia, the Brandberg (Fire Mountain) Massif is Namibia’s highest peak, at its zenith, the Königstein (King’s Stone), standing at a whopping 2573...