Etosha National Park covers 22,270 km², of which approximately 5,000 km² is made up of saline depressions or ‘pans’. The largest of these pans, the Etosha Pan, can be classified as a saline desert in its own right. The Etosha Pan lies in the Owambo Basin, on the north-western edge of the Namibian Kalahari Desert. Until three million years ago it formed part of huge, shallow lake that was reduced to a complex of salt pans when the major river that fed it, the Kunene, changed course and began to flow to the Atlantic instead. If the lake existed today, it would be the third largest in the world. Etosha is the largest of the pans at 4,760 km² in extent. It is nowadays filled with water only when sufficient rain falls to the north in Angola, inducing floods to flow southward along the Cuvelai drainage system. The Park consists of grassland, woodland and savannah. Game-viewing centers around the numerous springs and waterholes where several different species can often be seen at one time. The Park boasts some 114 mammal and over 340 bird species. Wildlife that one might see includes elephant, lion, giraffe, blue wildebeest, eland, kudu, gemsbok (oryx), zebra, rhino, cheetah, leopard, hyena, honey badger and warthog, as well as the endemic black faced impala. 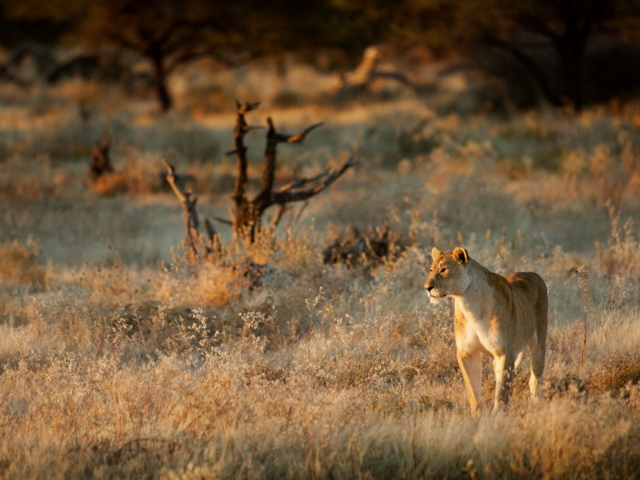 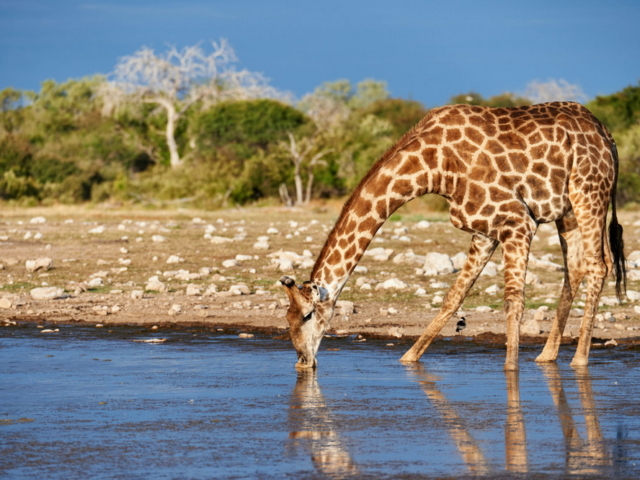 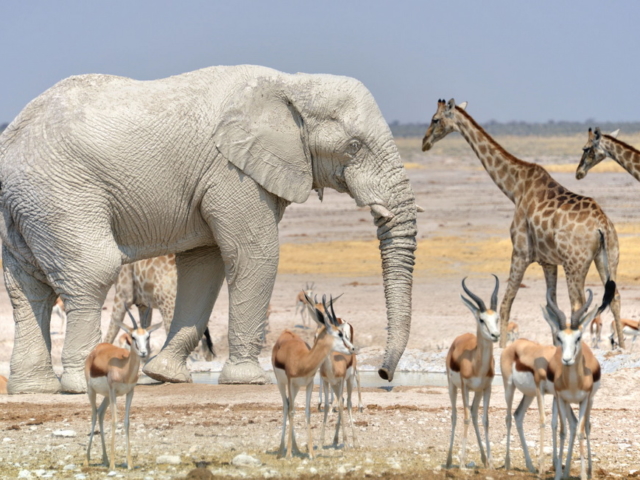 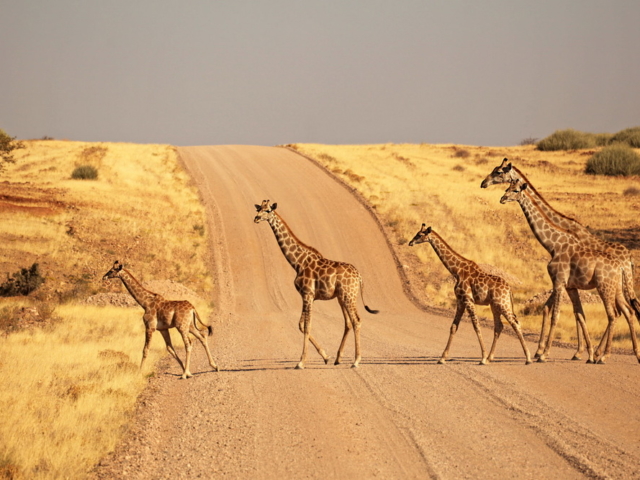 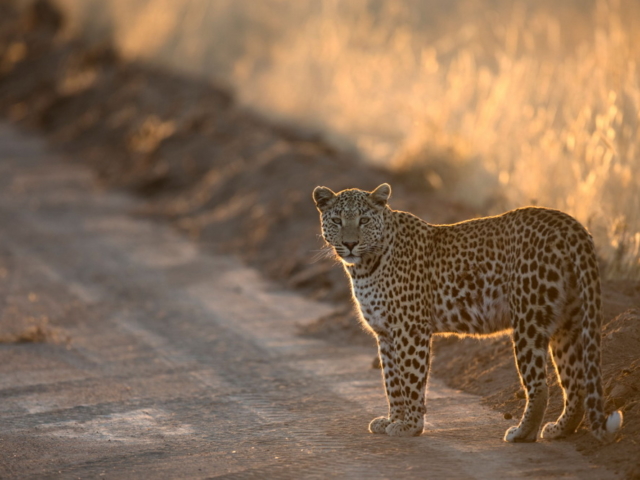 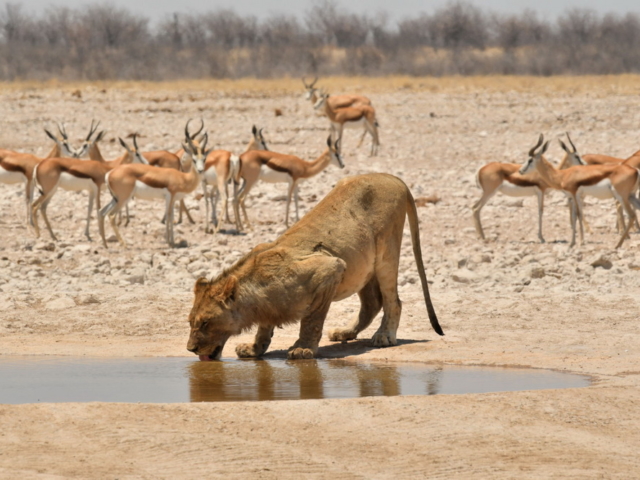 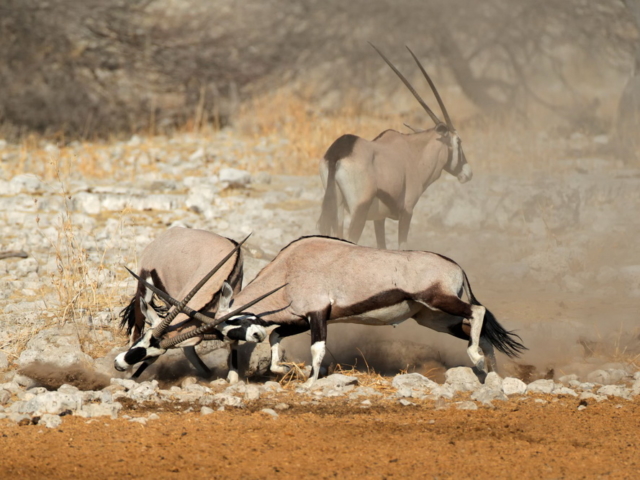 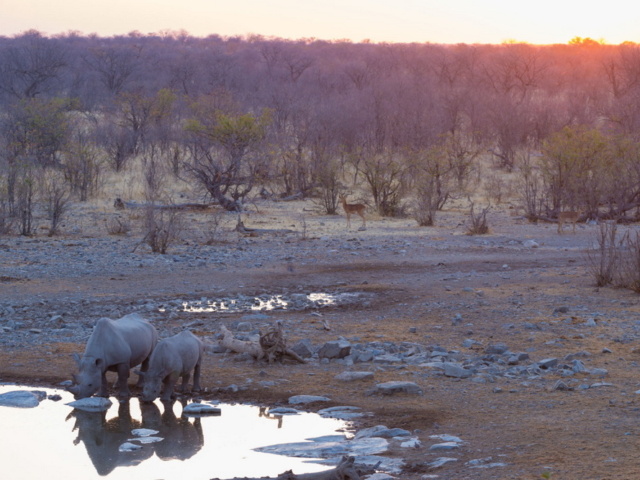 Built into an old German Fort Namutoni Campsite has a unique atmosphere. Within the fort you will find ample facilities. From the walls of the fort you can enjoy an elevated view of the King Nehale Waterhole allowing for great game viewing without leaving the camp. The walls of the fort are also and excellent spot for sundowners. There is hardly a better way to end a day in the bush and Namibia than to marvel at the colours of the setting sun. The Camp is situated in the eastern part of Etosha National Park and is accessible via the Von Lindequist Gate. Its close proximity to Fisher’s Pan makes Namutoni a hotspot for birders. Two restaurants, a craft shop, a pool and a viewing deck overlooking King Nehale Waterhole make the fort a great place to relax at lunchtime or after evening game drives. The African Fusion restaurant will introduce you to local flavours, while The Steakhouse offers popular western dishes. A superette, curio shop and petrol station allow you to stock up on everything that is necessary and nice.The camping area has generously spaced sites with plug point and communal ablution facilities on either side of the campsite.

From price: NZD0Location: Namibia
The lodge centres on an old German Fort overlooking the King Nehale waterhole; an elevated decked walkway provides excellent opportunities for enjoying the surrounding scenery, wildlife and the spectacular sunsets. The Fort has been developed into a hub of activity, offering two restaurants, a relaxation lounge, a bar, crafts boutique, curio shop, jewellers and bookstore....
From price: NZD0Rooms: 1Type: CampsiteLocation: Namibia

Okaukuejo is located 17 km from the southern entrance of the park, Anderson Gate. Okaukuejo is the oldest tourist camp in Etosha and it also functions as the administrative centre of the park. Okaukuejo is also home to the Etosha Ecological Institute. It is situated at the western end of the Etosha Pan. Facilities include a restaurant, bar, shop, swimming pool, kiosk and camp sites. The main attraction of this camp is that it overlooks a permanent waterhole which is floodlit at night. Here a wide diversity of wildlife congregate and interact from lion to rhino to elephant and antelope. The spectacle starts at dawn, with animals coming in large numbers to quench their thirst. The activity continues throughout the day until late at night. In the early evenings, it is not uncommon to have black rhino, elephant and lion all drinking at the same time.

Okaukuejo is located 17 km from the southern entrance of the park, and famous for its flood-lit waterhole, where visitors can observe at close quarters a spectacle of wildlife congregating and interacting. Accommodation is provided to suit every need, in premier bush chalets overlooking the waterhole; bush chalets and double rooms; or family chalets. Other facilities include a restaurant, bar, shop, swimming pool, kiosk and camping facilities.

From price: NZD0Type: Rest CampLocation: Namibia
Located in the south of Etosha National Park, Okaukuejo Rest Camp was formerly a military outpost founded in 1901. The property features a nearby waterhole, which is a hub of animal activity starting in the early hours of the morning. After sunset floodlights illuminate the waterhole, which is the best time and place to see...

Located in southwestern Africa, Namibia boasts a well-developed infrastructure, some of the best tourist facilities in Africa, and an impressive list of breathtaking natural wonders.