The names of Tanzania’s national parks are bywords for exquisite wildlife encounters: the Serengeti, Ngorongoro Crater, Lake Manyara, Tarangire, Ruaha, Selous, and Kilimanjaro among them. With almost 40% of the country given over to the protection of its native species across a huge variety of habitats, Tanzania packs a serious safari punch.

Occupying the north of the country are the world-beating attractions of Serengeti, Lake Manyara, Tarangire and Mount Kilimanjaro National Parks, and Ngorongoro Crater Conservation Area. Boasting quintessential African savannah dotted with vulture-clad acacia trees, the Serengeti is home to a huge amount of game, not least the Big Five species, as well as the annual Great Wildebeest Migration, often described as the greatest show on Earth.

Formed from the largest intact volcanic caldera in the world, the grasslands and high natural walls of the Ngorongoro Crater is not only a spectacular sight but also contains one of the densest populations of large mammals on the continent. Meanwhile, the sheer bulk of Mount Kilimanjaro, Africa’s highest peak, looms large over much of the region.

Tanzania’s south is also well-served with natural spectacles, being home to Ruaha National Park and Selous Game Reserve. Ruaha is the country’s largest protected area, ensuring plenty of space for its resident lion, cheetah, leopard and African wild dog to roam, alongside a huge elephant population and almost 600 species of bird.

Almost as large, the UNESCO-listed Selous contains savannah, native miombo woodland, and wetlands formed around the Rufiji River. Perhaps the most photogenic area of the park, here everything from black rhino to bush elephant can be spotted.

What’s more, Gombe Stream and Mahale Mountains National Parks in the west of the country are two of the top destinations in the region for coming into contact with our closest living relatives, the chimpanzee.

On this camping safari you will experience it all! From fantastic wildlife to impressive landscapes and meeting the local people. You will visit the highlights…

14-day Under the Stars of Tanzania and Kenya

On this 14-day Under the Stars of Tanzania and Kenya camping safari you will experience it all! From fantastic wildlife to impressive landscapes and meeting…

This 10-day Migration Camping  safari is well-suited for travellers with more time to discover the immense variety of East Africa. You will visit the highlights…

The Lemosho Route starts off on the western flank of Kilimanjaro, offering spectacular views of Mt Meru and the plains of Kenya’s Amboseli National Park.…

The Machame route is one of the most beautiful routes to the top of Mt Kilimanjaro. The climb begins in the lush rainforest and follows…

The Machame Route, with its diverse landscape and fantastic views, offers a unique experience to test your will power, fitness finesse and mental strength. The…

The lesser-known Lemosho route begins on the western side of Mt Kilimanjaro. The first 2 days of the tour cross the thick rainforest belt which…

The Marangu route is perhaps the easiest and most comfortable route to reach the summit of Mt Kilimanjaro. The route is well-developed and the climb…

16-day Journey to Tanzania and Kenya

Dates: 16 to 31 August, 2021 This safari is all about seeing Kenya and Tanzania's finest wildlife.  When it comes to an African Safari, less…

Tanzania's best-known wildlife areas.  Starting in Arusha, you travel to Lake Manyara National Park, where one can enjoy its unique birdlife. The next destination is…

Our popular 8-day Tanzania Lodge Safari will take you on an epic adventure through some of northern Tanzania's best-known wildlife areas.  Starting in Arusha, you…

Our popular 8-day Tanzania Safari, using Tanganyika Wilderness Camps will take you on an epic adventure through some of northern Tanzania's best-known wildlife areas.  Starting…

This 8-day Tanzania Luxury Fly-In Safari itinerary is created to highlight the crowning jewels of Tanzania’s safari destinations, taking you on a journey through the…

Journey through the unexplored southern regions of Tanzania staying at two remote and beautiful camps, maximising your time immersed in the wildlife of the south. …

Often overlooked by the many safari offerings in Northern Safari Circuit, Tanzania's southern parks of the Selous Game Reserve and Ruaha National Park are a…

Our 10-day East African Migration Explorer safari combines the best of Kenya and Tanzania. Look out for unique and rare species in semi-arid Samburu National…

Our 12-day East African Migration Explorer safari combines the best of Kenya and Tanzania. Look out for unique and rare species in semi-arid Samburu National…

Our 13-day Best Value Kenya and Tanzania safari showcases some of the best wildlife areas in East Africa.   From the Masai Mara Game Reserve, Kenya’s…

13-day Highlights of Kenya and Tanzania

Our 13-day Highlights of Kenya and Tanzania starts out with a scenic drive down the Great Rift Valley, to explore some of Kenya’s and Tanzania’s…

Starting in Nairobi, this popular 4WD road-based safari takes in the best wildlife areas of Kenya and Tanzania.  Explore the Masai Mara National Reserve, one…

Starting in Nairobi, Kenya this popular 4WD road-based safari takes in the best wildlife areas of Kenya and Tanzania.  You will explore the Maasai Mara…

Our 14-day Migration Seeker safari is designed for families and small groups wanting their own ‘private’ safari.  Combining the best of Kenya and Tanzania, this… 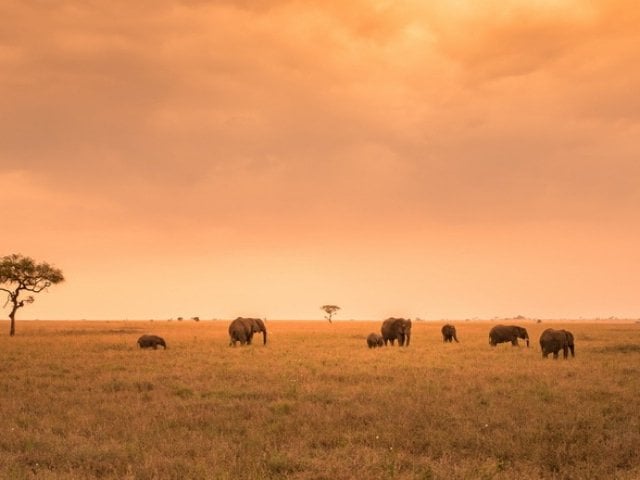 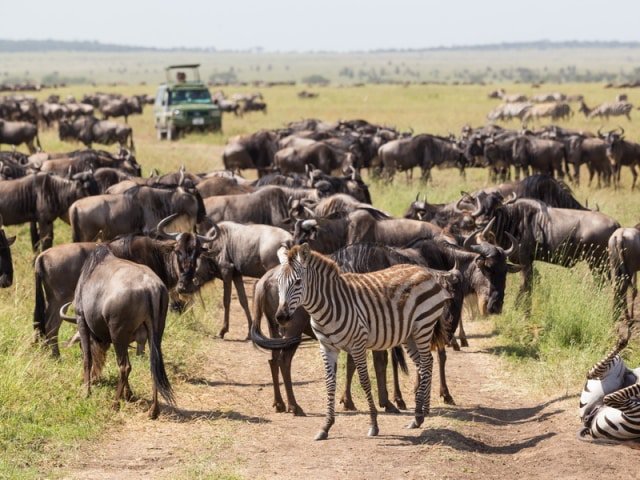 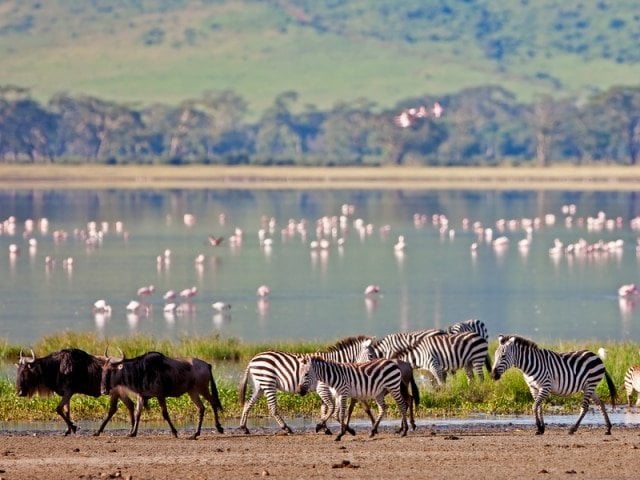 Situated on the beautiful island of Zanzibar, Stone Town is the old city and cultural heart of the island and a UNESCO World Heritage Site....

Dar es Salaam is Tanzania’s former capital, her largest city and main port. The distinctly African, colourful markets are well worth a visit and both...

Ruaha National Park has been dubbed the undiscovered gem of Tanzania and is often called “Tanzania’s best kept secret”. Situated far off the...

Selous Game Reserve offers guests a slice of undisturbed wilderness, teeming with a spectacular array of fauna and flora.  Selous was declared a World Heritage...

The vast, rolling savannah of the Northern Serengeti, is known as the hub of the great migration. The landscape is characterised by vast stretches of...

Serengeti National Park is one of the most famous wildlife areas in Africa and is synonymous with wildlife and classic African scenery.  Established...

Situated in the Crater Highlands in Northern Tanzania, the Ngorongoro Conservation Area is best known for its archaeological and geological significance, rich wildlife, and beautiful...

Set 23 kilometres east of Arusha, Usa River is the capital of Tanzania’s Meru District and lies between the Ndurdoto Crater and Arusha National Park....

Bordering Kenya to the north, the Ngorongoro Region is known for its abundance of beautiful natural features. It encompasses the Ngorongoro Conservation Area, a UNESCO...

Kilimanjaro’s snow-capped peak is one of the most awe-inspiring sights in Africa. Straddling the Kenya/Tanzania border, the iconic Mount Kilimanjaro rises up to an impressive...

Lake Burunge is one of three major lakes in the Manyara Region of Tanzania. Located in the migratory corridor of Manyara and Tarangire, Lake Burunge...

The town of Karatu is located at the southern end of the Ngorongoro Conservation Area. The landscape of Karatu is dominated by the extinct volcano...

The Seronera region, in the central Serengeti, is set directly on the Great Migration route, and offers excellent viewing of this incredible annual phenomenon, when...

Situated in the East African country of Tanzania, Lake Natron is fed by mineral-rich hot springs and is less than three meters deep. High levels...

The rich acacia-dotted plains of the Eastern Serengeti are home to abundant wildlife. Visitors flock here to view the world-renowned wildebeest migration. Some of the...

Located in Northern Tanzania, the Ngorongoro Crater is best known for its natural beauty and abundance of diverse wildlife; which makes it one of Africa’s...

Known as one of Africa’s ‘Great Lakes’, Lake Victoria is world-renowned as the source of the Nile. This massive 6.5 million-hectare lake is three times...

Resting at the foot of Mount Meru, the sprawling city of Arusha is known as the safari capital of northern Tanzania. It serves as an...

Despite Lake Manyara National Park being one of the smaller national parks in Tanzania it offers gorgeous landscapes and is home to an...

As the sixth-largest national park in Tanzania and covering an area of 2,600 square kilometres, Tarangire National Park is most popular for its...

Situated in the heart of Tanzania, the Central Serengeti encompasses the world-famous Seronera Valley which is known for its prime wildlife-viewing opportunities. This picture-perfect landscape...