By africansafarisltd, May 12, 2021 Posted in: Nature Guide

The stunning lilac-breasted roller is one of Africa’s most colourful bird species. It is frequently seen in national parks and game reserves throughout East Africa and Southern Africa. This bird’s rainbow of colours is absolutely breathtaking. Males and females have a variety of pastel shades, ranging from the lilac breast, olive crown, and rusty cheeks to the bright turquoise and blue wings that glow in the sunshine as the bird flies across the grasslands.

In the African sky, lilac-breasted rollers are true rainbows. This small bird dazzles and hypnotises viewers with its blue wings, green head, and purple chest. In many civilizations, they also hold a wealth of tradition and folklore.

The lilac-breasted roller is known as the “peace bird” in African tradition. When kings declared peace in their land, it was frequently sacrificed. It was known as the “bird of the sun” and was instrumental in keeping ancient societies in peace.

The roller bird family (also known as Coraciidae) is a species of Old World birds named for their unique ability to perform aerial acrobatics in flight. This consists of side-to-side rolling motions and fast, shallow dives from high elevations.

There are four other roller species present in Africa (Purple Roller, Lilac-throated Roller, Broad-billed Roller, and European Roller), but it is the Lilac-breasted Roller that is the most colourful.

Lilac-breasted rollers are carnivorous, and their diet includes beetles, spiders, scorpions, millipedes, centipedes, lizards, and other small vertebrates. They perch on high points such as trees or telephone poles before swooping down on their prey. Smaller prey will be swallowed on the ground, but larger prey will be brought up to their perch and beaten against the tree before it dies. Lilac-breasted rollers take advantage of periodic forest fires by hunting around the approaching edge of the fire for prey fleeing the flames. 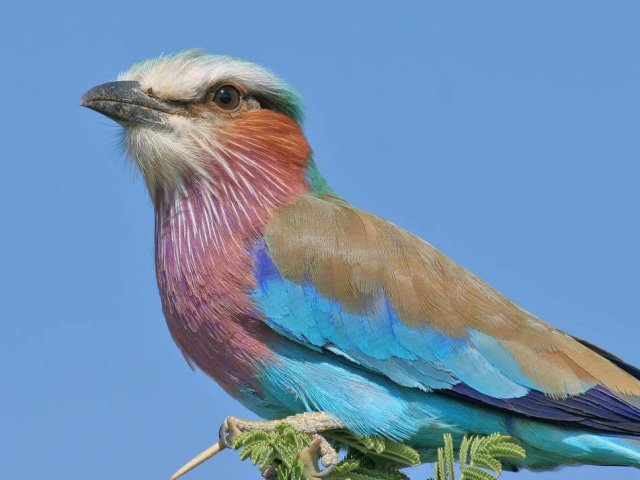 Rollers are monogamous and are believed to mate for life. The birds climb steeply up and almost stall during a courtship flight. They dive down with their wings closed to gain momentum and level off, then open their wings and roll from side to side. This courtship appearance earned them the nickname “roller.”

The lilac-breasted roller is a cavity nester. They will build a nest in a natural tree hole or a cavity excavated by woodpeckers or kingfishers, typically 15-20 feet above level. They will also nest in old termite mounds. Both males and females actively protect the nest, which is a plain flat pad made of grass.

Lilac-breasted rollers usually lay 2-4 eggs per season. For 22-24 days, the male and female will rotate incubating the eggs. Both parents will also share the responsibility of feeding the altricial chicks for the next 19-20 days.